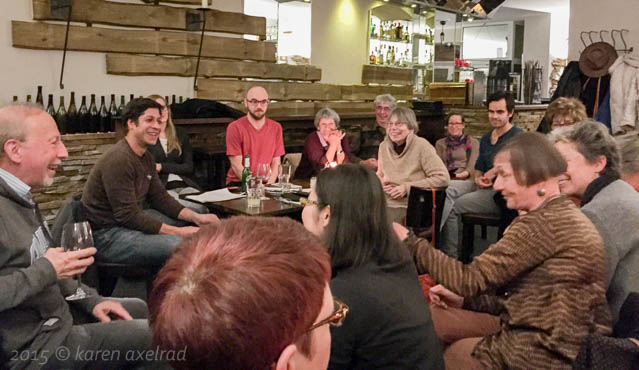 At the November 5 Stammtisch, Miguel Verde talked to AVA about the massive, and massively problematic, international trade treaty, the Transatlantic Trade and Investment Partnership or TTIP. Miguel gave an informative talk about a complex theme followed by a lively discussion. (For additional information from Miguel, see below.)

from Miguel, in addition to what we received in the October 26 mailing:

Here is the first blog post of the Berlin Forum’s new blog section…. You will find that the post may resonate with AVAers inasmuch as it attempts to explain why this recent October protest against TTIP was Germany’s largest since that other in 2003, against what became the Iraq war, when a core of you first met each other (as your website story tells very vividly): http://bfogp.org/blog/why-was-germanys-recent-ttip-protest-the-countrys-largest-in-over-a-decade/

Besides the blog post (which has a lot of hyperlinked material) I think that our photography project, which attempts to unravel the TTIP by reflecting on the consequences of the NAFTA could be interesting. Its format addresses various aspects of both NAFTA and TTIP separately, enabling the person who explores it to be drawn by the photographs or the articles that refer to specific problems without having to delve into every aspect of the project: http://bfogp.org/publications/reflecting-on-nafta-to-better-understand-ttip/