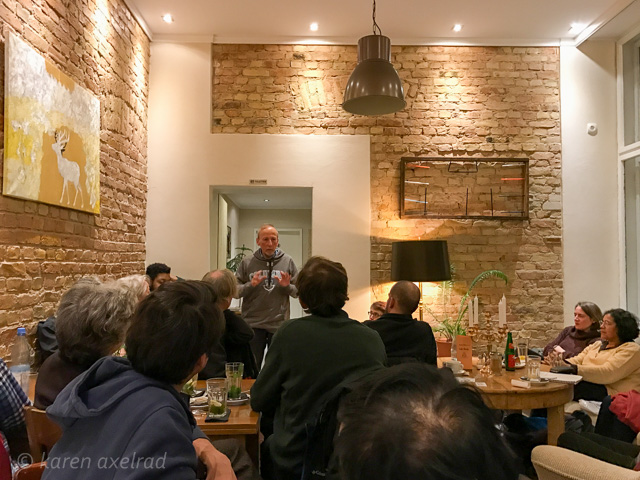 March 2 Stammtisch with Adam Wilkins speaking. Click on photo for the rest of the photos

Our March 2 Stammtisch (8:00 pm)will be dedicated to SCIENCE, SCIENTISTS and the SCIENCE MARCH on Earth Day, April 22. The Stammtisch will feature a presentation by our own Adam Wilkins of his new book Making Faces: The Evolutionary Origins of the Human Face, Harvard University Press, January 2017: “Humans possess the most expressive faces in the animal kingdom. Adam Wilkins presents evidence ranging from the fossil record to recent findings of genetics, molecular biology, and developmental biology to reconstruct the fascinating story of how the human face evolved…. In demonstrating how the physical evolution of the human face has been inextricably intertwined with our species’ growing social complexity, Wilkins argues that it was both the product and enabler of human sociality.”

We would also like to discuss the role of science in the resistance against right-wing radicalism. What role can and should scientists play in the fight against fake news? What are the pros and cons of scientists’ political engagement? And finally, how can AVA participate in the Science March on Earth Day, April 22?

So join us at our first-Thursday-of-the-month STAMMTISCH at 8:00 pm at CAFE DADDY, Kolonnenstrasse 50 in Schöneberg.

This entry was posted in Home, Meeting. Bookmark the permalink.