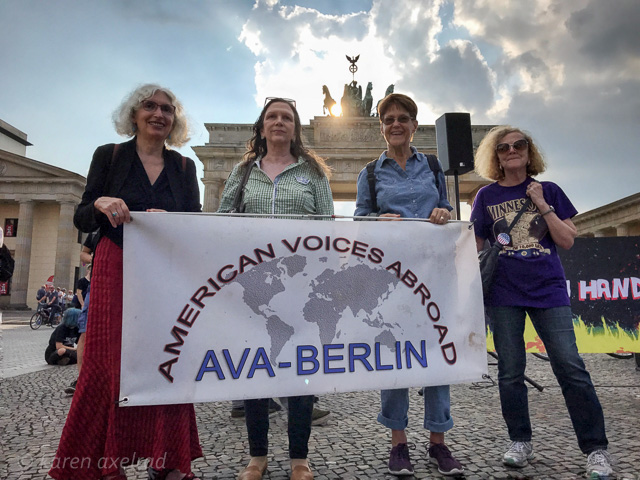 Meet in front of the US Embassy. AVA-Berlin is joining the solidarity demonstration (organized by The Coalition Berlin) on Wednesday, August 16, 6 pm, at Pariser Platz. We stand together in solidarity with activists in Charlottesville, Virginia, who bravely stood up to the racist and fascist “Unite the Right” demonstration last Saturday. The murderous attack on anti-racist activists demonstrates the deadly consequences of the right’s organizing, emboldened under a sympathetic president. Look for the AVA-Berlin banner! And here again is the Berlin Statement of Solidarity that AVA just signed:

We the undersigned groups and individuals stand in solidarity with Black Lives Matter and anti-fascist activists in Charlottesville, Virginia, who bravely stood up to the racist and fascist “Unite the Right” rally on Saturday, August 12, 2017.

At the rally fascist and white supremacist groups waved swastika and confederate flags, chanted “Jews shall not replace us,” and marched around the statue of Confederate icon and defender of slavery, Robert E. Lee.

Under the guise of “free speech,” these groups seek to recruit others to their cause, with the intent of intimidating and harming people of color, Muslims, Jews, immigrants, women, and LGBTQ people. Yesterday this became reality when a white supremacist intentionally drove into counter-demonstrators, killing one activist and injuring 19 more.

This attack demonstrates the deadly consequences of the right’s organizing, and is a direct extension of their dehumanizing ideology. It is the result of a sympathetic American president who encourages racist scapegoating and feelings of white victimhood.

As activists in Berlin, Germany, we are reminded daily of the murderous consequences of fascism. For this reason, fascists must be countered and confronted, not ignored. This task is especially urgent as we witness the growth of the far-right across Europe and the United States, accompanied by attacks on vulnerable populations.

We will continue to defend Muslims, Jews, queer people, immigrants, people of color, and women. We recommit ourselves to anti-fascist organizing and education, and urge individuals and organizations to do the same.