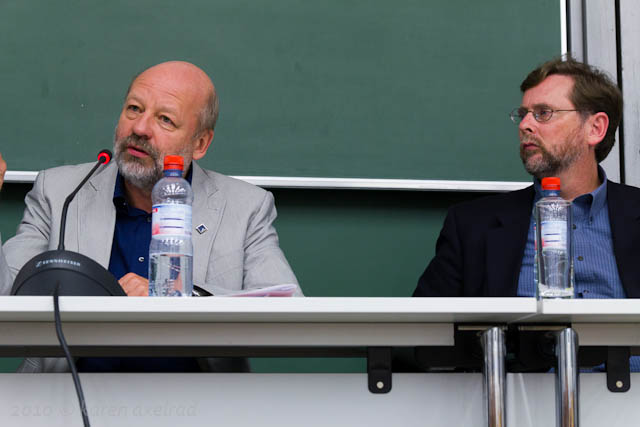 For the first time ever, we will be canceling the October Stammtisch due to a special event with Steven Hill, the political writer whose reading tour with his latest book, Europe’s Promise (2010), will bring him back to Berlin next week.

On Thursday, October 7 at 7 p.m., he will be discussing sustainable energy policy with Hans-Josef Fell, Energy Policy Speaker for the German Greens. The event launches our new Berlin-American salon on sustainability issues, Ava’s Transatlantic Green Salon. It will be hosted by the Environmental Policy Research Centre at the Free University Berlin – Henry-Ford-Bau, Hörsaal B, Garystrasse 35.

On Friday, October 8 at 7 p.m. he will give a more general presentation of his book at the Humboldt University (main building, Unter den Linden 6, room 3075) at an event organized by Democrats Abroad Berlin.

Both events are free of charge. We look forward to seeing you at one or both for a stimulating discussion of transatlantic political issues!

Steven Hill, Former Director of the Political Reform Program at the New America Foundation and Co-founder of FairVote, is the author of Fixing Elections: The Failure of America’s Winner Take All Politics (2003) and 10 Steps to Repair American Democracy (2006). He is traveling Europe this fall to give the Jacquemin Seminar Lecture at the European Commission and present his latest book, Europe’s Promise: Why the European Way Is the Best Hope for an Insecure Age (2010). According to Steven Hill, the cutting-edge solutions for the 21st century are arising in Europe, not the United States, though many Americans still harbor outmoded ideas about “old Europe”.

Hans-Josef Fell is a Member of the German Bundestag and Energy Policy Speaker for the German Greens. Hans-Josef Fell wrote the draft Renewable Energy Sources Act (EEG), which was adopted in 2000 in the face of strong political opposition. He was also involved in drafting the law amending the EEG in 2004. The EEG is the foundation for the technological developments in photovoltaics, biogas, wind power and geothermal energy in Germany, which are admired throughout the world. The underlying principle of the EEG has now been copied in dozens of countries.

The discussion will be held in English and moderated by Miranda Schreurs, Director of the Environmental Policy Research Centre at the Free University Berlin.